9 Foods Every Visitor to Peru Should Try 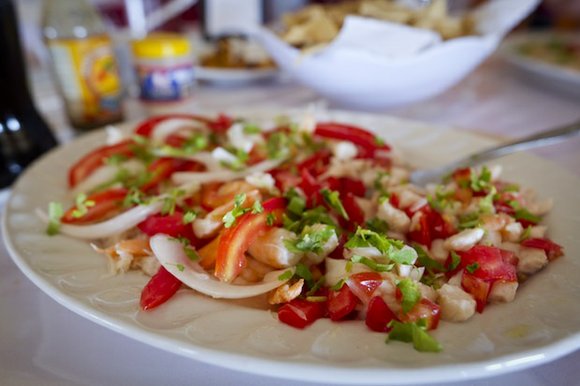 A plate of ceviche served at Saboritos in Campeche, Mexico. Ceviche is a dish of raw seafood marinated in citrus juice popular in various forms in coastal regions of Latin America. The Mexican style usually includes tomatoes onions and cilantro and sometimes ketchup.

(CNN) -- It's been influencing global cuisine for centuries, but Peru's culinary scene is finally getting the attention it deserves.

And for foodies, it's a destination worth checking out.

Since pre-Columbian times, ingredients have been sourced everywhere from the lofty heights of the Andes to the depths of the Pacific ocean and the eastern Amazon region.

And while Lima's top restaurants such as Central and Maido serve up some of the world's finest fare, you don't have to pay through the nose to sample fantastic cuisine laden with flavor and texture.

Not sure where to begin? Here are nine of the country's most popular foods to get you started.

Seafood bathes in this spicy yet creamy concoction, called leche de tigre (tiger's milk), for a few hours: it's even said to cure hangovers.

Where to try it: Prepare for a show before tucking into the cebiche at Chez Wong. Owner/chef Javier Wong fillets whole fish with a huge blade like he's slicing through butter.

Beef heart is seasoned with a garlic, cumin, panca chili and vinegar adobo, then slapped on a brazier like a shish kabob.

Succulent, tender and zinging with flavor, when Peruvians find a preferred purveyor of this filling and hearty snack, they'll line up as long as it takes to get their hands on it.

Anticuchos are usually served with boiled potatoes and corn on the cob.

It's also worth looking out for mollejas de pollo (chicken sweetbreads) and chinchulines (tripe) anticuchos.

Where to try it: La Tía Grimanesa -- which started out as a huarique (food cart) but now has a fixed abode in Miraflores -- is a benchmark for Lima's traditional anticuchos.

When two peoples as passionate about food as Peruvians and Japanese are come together, the only possible outcome is a culinary firework display of epic proportions.

The prominent Japanese migration to Peru in the early 20th century spawned Nikkei, which blends Japanese culinary techniques with Peruvian ingredients, fusing the best of both worlds.