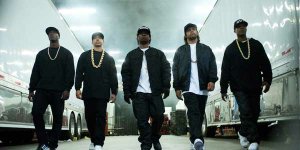 Jerry Heller, the former manager of N.W.A., is suing all those involved in the group's recent biopic, Straight Outta Compton, for (at least) $110 million, reports TMZ. Heller, now 75, has just filed a lawsuit against Ice Cube, Dr. Dre, the estate of Eazy-E, NBC Universal, and others for defamation and using his likeness in their film without his permission.

Heller claims that Straight Outta Compton wrongly portrayed him as "a sleazy manager who took advantage of Eazy-E, Dr. Dre, and Ice Cube." He said that the movie lied about numerous different scenarios involving him, including him withholding a $75,000 check from Ice Cube, persuading Dre and Cube to sign misleading contracts, and getting fired by Eazy-E.

The lawsuit also accuses the film's producers of incorporating pivotal scenes from Heller's memoir, "Ruthless," into the film without permission.

Heller wants $35 million in compensatory damages, $75 million in punitive damages, and then the rightful amount of the film's profits, which he and his lawyers believe will bring the total sum to at least $110 million.