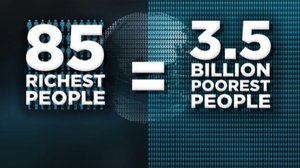 NEW YORK (CNNMoney) -- Some weeks, RaShaun Rodgers works 50 hours at his two jobs. Other weeks, he works fewer than 10.

His unpredictable schedule, along with his $8 hourly wage, makes it nearly impossible for him to support his 4-year-old son, or even provide for himself. He relies on $170 a month in food stamps, as well as Medicaid, to make ends meet.

The Milwaukee resident puts in up to 30 hours a week as a sales assistant at Old Navy. He recently added a second job as a crew member at Wendy's, where he hopes to train as a manager later this year. He's looking for a single, full-time job, but hasn't landed anything yet.

"Sometimes I work full-time hours, but at part-time pay," said Rodgers, 24. "If I'm working hard, I shouldn't have to rely on anyone for assistance. I hate depending on the government."

Like millions of other Americans, Rodgers is working, but still poor. A combination of meager pay and insufficient hours leaves these folks unable to get by, much less move up the economic ladder.

Rodgers is part of a growing movement of low-wage workers fighting for higher pay. Some companies, including McDonald's, Wal-Mart and T.J. Maxx, have recently agreed to increase their hourly rates to at least $10 an hour. But employers would have to boost pay to a minimum of $12 an hour for families to become more self-sufficient, said Ken Jacobs, chair of the University of California Berkeley Center for Labor Research and Education.

Until then, many working families continue to collect government benefits. A quarter of those receiving food stamps live in households where at least one person works 30 or more hours a week, according to the center's research. Some 21% of people receiving cash assistance from the federal government are in working families.

Many of these folks are employed in fast food and retail, but they are also home health care workers, pre-school teachers and waitresses, said Sarah Halpern-Meekin, an assistant professor at the University of Wisconsin-Madison, who co-wrote "It's Not Like I'm Poor," a new book on struggling working families. Since their hours often fluctuate, many of these low-wage workers also are subject to great shifts in income each week.

Years ago, low-wage workers were usually teenagers looking to make a few extra bucks. Now, these workers are in their 30s, on average, and provide more than half of their family's income, Jacobs said. And more are educated, with a growing number having attended college and some with bachelor's degrees.

Jemaire Steward, 37, is the sole breadwinner for his wife and two young sons, ages 3 and 1. His work schedule varies between 0 and 70 hours a week as a chef at a casual seafood restaurant in the Washington D.C. area, where he makes $10.10 an hour. He is also on call at other restaurants in hopes of securing another paycheck.

Still, his wildly erratic hours left him making only $8,000 last year, he said. His family receives food stamps and Medicaid and is facing eviction from their one-bedroom apartment in Northeast D.C. He has applied unsuccessfully for jobs at hospitals, hotels and other eateries, hoping to get a higher wage and full-time hours. But employers balk when he asks for $15 an hour, he said.

Even having two working parents isn't enough to lift some families out of poverty.

Melinda Robinson and her husband, Romero, both have jobs. He works full-time as a cabinet builder for a small business, taking home about $1,000 a month after taxes. She works part-time at Taco Bell for $9 an hour.

Together, she estimates the couple made about $27,000 last year, which wasn't enough to support their six young children solely through their wages. They receive $825 a month in food stamps, and she and the children are on public health insurance. The family also received an Earned Income Tax Credit worth about $9,500, which went toward buying beds and clothes for the kids and catching up on their monthly rent.

"We are working Americans and we deserve so much better," said Robinson, 38, from Kansas City, Missouri. "We all deserve a livable wage."