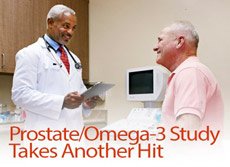 Most of the published studies suggest that omega-3s tend to curb the growth of prostate tumors.

For example, see Positive Omega-3/Prostate Trial, and the links it contains.

Their analysis showed that the men with the highest blood levels of seafood-source omega-3s were more likely to develop prostate cancer.

But experts dismissed those conclusions, because, among other reasons, the Ohio State team failed to properly account for major risk factors.

(Its other flaws are covered in the “Seven reasons for deep skepticism” section of our Fishy Prostate News article).

As prostate-cancer expert Professor Anthony D'Amico, M.D., of Harvard Medical School said in an interview, “… they left out some very important risk factors ... [which] makes this association extremely weak and possibly false.”

Now, researchers have found yet another way in which omega-3s may curb the growth and spread of prostate cancer.

The FFA4 receptor acts as a signal to inhibit tumor growth factors, thereby slowing the progression of prostate cancer.

“This kind of knowledge could lead us to better treat or prevent cancer," Meier said.

It’s yet to be proven that fish or omega-3 fish oils can produce and maintain this specific anti-cancer effect in people.

And, the WSU study suggests that stimulation of the FFA4 receptor must be continuous ... while the effect of dietary omega-3s (from fish or fish oil) on the receptor may fade after they're fully metabolized.

So it seems urgent to discover whether consuming fish or omega-3 fish oil daily might affect the receptor enough to help curb cancer in people.

Most prostate cancers grow very slowly ... so any food factors that can help slow tumor growth could make a big difference to rates of diagnosis and death.