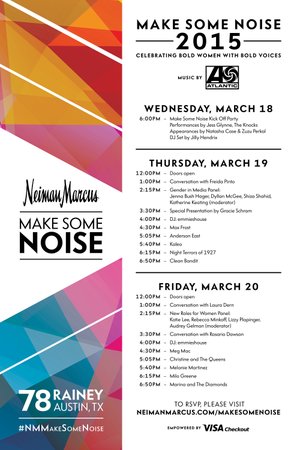 Neiman Marcus returns to Austin with its second annual Make Some Noise brand platform activation celebrating women on the rise, women making a difference, and women shaking up the status quo to lead the way forward for their generation and all the ones to come.

Following the success of the official launch of Make Some Noise last year, which featured two of the top fifty shows of SXSW according to Rolling Stone,the three-day activation running from March 18 to 20 at 78 Rainey Street will once again feature thought-provoking panel discussions with female noisemakers in technology, fashion, film, music, food, art, and business. Each day will be capped off with live music from Atlantic Records Group and its affiliated labels, curated by one of the most influential women in music, Julie Greenwald, Chairman and COO of Atlantic Records Group.

“For over 100 years, Neiman Marcus has dressed women of style; and style breeds confidence. But more so, for today’s woman, it’s a combination of style and substance that is propelling them to succeed in groundbreaking ways,” said Wanda Gierhart, senior vice president and chief marketing officer, Neiman Marcus Group. “Over the next three years, our goal is to embody Make Some Noise in every facet of our business using brand activations at key cultural moments.With trailblazing female panelists talking about their success, the hottest emerging musicians, and a roster of supportive partners, we want to inspire all women to join in, use their voices and make some noise in their own lives.”

The Make Some Noise activation begins with a housewarming party on Wednesday, March 18, and then kicks into high gear on Thursday, March 19 and Friday, March 20 with an exciting lineup including the following: