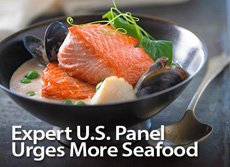 Every five years, the U.S. government updates its Dietary Guidelines for Americans.

The Guidelines are devised jointly by the U.S. departments of Health and Human Services (HHS) and Agriculture (USDA).

They are used by health professionals, policy makers, and educators ... and they guide federal education and food assistance programs.

To help them with the 2015 update, the federal agencies enrolled 14 recognized experts in nutrition, medicine, and public health to serve on an Advisory Committee.

The committee held public meetings over the past two years, and its just-released recommendations will surely shape the 2015 Dietary Guidelines for Americans, set to be released later this year.

The expert panel agreed that – compared with the standard American diet – eating patterns higher in whole plant foods and lower in calories and meat are healthier for people and the environment.

To achieve these goals, the official advisory committee recommend any of three eating plans:

Oddly, their report does not provide summary descriptions of any of the three patterns ... just dense tables showing the nutrient compositions of each.

But as they wrote, “A moderate amount of seafood is an important component of two of three of these dietary patterns [the Healthy U.S.-style and Mediterranean-style Patterns], and has demonstrated health benefits.”

The panel described the characteristics common to both of these non-vegetarian diet patterns:

Reduce intake of sodium, saturated fat, and added sugars, and replace them with whole plant foods, seafood, and low-fat dairy.

As in 2010, the government’s expert advisory panel followed the evidence when it came to the alleged risks of seafood.

This was their key statement on that point: “Regarding contaminants, for the majority of wild caught and farmed species, neither the risks of mercury nor organic pollutants outweigh the health benefits of seafood consumption.”

The warnings – from well-meaning advocacy groups – cite hypothetical risks that have repeatedly been proven either highly exaggerated or flat wrong.

In fact, those misguided warnings are seriously counterproductive, as they may cause the very health harms – especially sub-optimal child development – they’re intended to prevent.

For more on that point, see these and other reports in the Omega-3s & Child Development section of our news archive:

Benefits of Fish to Kids Found to Outweigh Risks

Most Fish Rank as Very Safe on New, Selenium-Based Standard

Current guidelines from the U.S. FDA and EPA advise pregnant and nursing women to eat 8-12 ounces of a variety of lower-mercury fish a week … but limit tuna consumption to six ounces per week.

Fortunately, the advisory committee recommended that both agencies “re-evaluate” their stance on tuna for pregnant women, which singles out tuna because it is higher in mercury than most of the popular species.

They noted that even when women ate double the recommended six ounces of tuna weekly, the benefits far outweighed the risks.

And they even said that pregnant women do not need to avoid canned albacore (“white”) tuna … which has more mercury than canned “light” tuna (typically skipjack or tongol tuna):

“Albacore tuna ... is a special case of a popular fish highlighted by the 2004 FDA and EPA advisory. For all levels of intake including more than double the 12 ounces per week recommendation, all evidence was in favor of net benefits for infant development and CHD [coronary heart disease] risk reduction.” (HHS 2015; page 394; lines 772-725)

As Dr. Abrams said, “The benefit of having (omega-3 fatty acids) in your diet really exceeds the likely risk of contamination. The point is that you should have a variety of types of seafood and not limit yourself to one type, and variety includes canned tuna.”

The panel recommended that people get whatever seafood they can find and afford, whether farmed or wild.

But, aside from environmental concerns about fish farming, they dropped the ball on an important nutritional distinction between farmed and wild fish.

They said “farm-raised seafood has as much or more [omega-3] EPA and DHA per serving as wild caught.”

That is only true for farmed salmon, which typically has a bit more omega-3s than wild salmon ... but much higher levels of total fat, saturated fat, and omega-6 fat.

The large amount of omega-6 fat in farmed salmon blocks some of the benefit of its omega-3 fat while promoting inflammation. See Farmed Salmon's Diet Yields Unhealthful Cardiovascular Effects.

To learn more about the health risks of America’s excessive intake of omega-6 fats from cheap vegetable oils, see Know Your Omega-3/6 Numbers.

We were pleased that they noted the low omega-3 content of farmed (and wild) catfish and tilapia, compared with fatty wild fish like salmon, tuna, and sardines.

But they failed to note that farmed catfish and tilapia also have high very levels of omega-6 fats: see Farmed Fish Possess Unhealthful Fat Profiles and Tilapia Taken to Task.

Overall, we are pretty impressed with the quality of the panel’s recommendations … which, if followed, would improve Americans’ health considerably.