Portland's Grandparents Release The Title Track, "Kids in the Alley," From Their Tour Cassingle & Forthcoming LP! 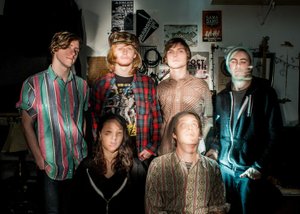 "We're premiering their new happy track "Kids in the Alley," which starts off with sing-song elements of a Flaming Lips song, and is quickly flipped into a groovy psych dream. You know that hard break-down toward the end of each bridge in every Tame Impala song? That's basically what this entire song sounds like." Noisey

The mark of any great band is the ability to evolve. Over the past five years, Portland’s Grandparents have shape-shifted in only the most engaging of ways, posturing blustery, expansive psych-pop into unexplored aural corners with each new recording.

With the successful production of several self-recorded, lo-fi EPs to their credit, the space-y six-piece are whetting appetites with the arrival of the Kids in the Alley cassingle. On the strength of the impossibly catchy title-track, "Kids in the Alley" delivers audacious, jangly pop music with an eye toward the hallucinatory, prompting visions of psychedelic royalty like the Seeds or early Kinks while decidedly forging their own sonic pathways.

The three-song cassette-only release serves as a sneak peek to the band’s highly anticipated unveiling of their debut LP, Sincerely, Bagman, due out later in 2015.