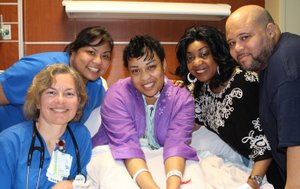 Regina Pippins had just landed a new job and was looking forward to starting. But for a week, the 40-year-old had not felt well, contending with an upset stomach and indigestion. Torey, her husband of 12 years, suggested maybe a hot bath would help.

“I was in the bedroom when I heard her cry for help. It was so faint I almost didn’t hear,” said Torey Pippins, a former U.S. Marine. When he entered the bathroom, Regina was unconscious in the bathtub. “I called to Jesus for help to get her out of the bath. With the water, my feet were slipping.”

Responding to the commotion, Torey’s visiting cousin called 911. A former nurse, she started cardiopulmonary resuscitation (CPR). Regina wasn’t breathing and had no pulse.

When sudden cardiac arrest occurs, blood stops flowing to the brain, the heart, and the rest of the body, and the person collapses. In fact, the victim is clinically dead and remains so unless someone helps immediately. In addition, a person who goes more than five minutes without heartbeat, blood flow, or oxygen is in serious danger of permanent brain damage.

Emergency medical technicians from the Southeast Volunteer Fire Department were able to resuscitate Regina by twice administering an electric shock to her heart, and raced her to Memorial Hermann Southeast Hospital.

According to the American Heart Association, cardiac arrest outside the hospital kills roughly 250,000 Americans each year. Less than 10 percent survive, and among those who survive, about one in 10 suffers severe brain damage.

Torey and other family members followed the ambulance to the hospital. Once there, the Emergency Center staff told them that Regina had not yet regained consciousness.

Pulmonary and Critical Care Specialist M.C. Patel, M.D. began therapeutic hypothermia, which involves the deliberate reduction of a patient’s core body temperature and is used for those who don’t regain consciousness after return of spontaneous circulation following cardiac arrest. A patient’s temperature is slowly lowered to between 89.6° to 93.2° F, and then gradually raised back to normal. This medically induced coma helps improve survival chances and brain function.

“In patients who have been successfully resuscitated after cardiac arrest, mild therapeutic hypothermia can improve the chances of survival with good brain function,” said Dr. Patel. “Decreasing the brain’s demand for oxygen, hypothermia lessens the production of neurotransmitters, slows down brain activity, and reduces the amount of free radicals that might damage the brain.”

The medical team placed special pads with circulating, chilled water directly on Regina’s skin, started her on medications to stay in the coma, and began medication to prevent shivering which is the body’s way of staying warm. After 24 hours, they slowly warmed her body and began to assess her physical and mental status.

“They told us it could take a while for her to wake up and until then, it was hard to tell how much damage was done,” said Torey. “I played her favorite gospel music and we never left her side, constantly talking to her.”