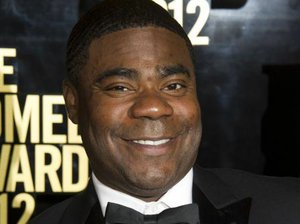 NEWARK, N.J. (AP) — A Wal-Mart driver involved in a highway crash that killed a comic and severely injured actor-comedian Tracy Morgan has asked a judge to reconsider her decision not to delay Morgan’s lawsuit against the company.

Truck driver Kevin Roper isn’t a defendant in Morgan’s lawsuit against Bentonville, Arkansas-based Wal-Mart Stores Inc., but he wants to intervene to delay it from moving forward until his criminal case is resolved. He filed his appeal on Monday.

Roper, of Jonesboro, Georgia, faces several criminal charges, including death by auto, in state court and has pleaded not guilty. He’s not a defendant in Morgan’s federal lawsuit but wanted to intervene in it and delay it from moving forward until his criminal case could be resolved.

U.S. Magistrate Judge Lois Goodman wrote this month that a delay would unfairly affect the parties in Morgan’s lawsuit, which seeks punitive and compensatory damages, and that Roper didn’t cite relevant case law to back up his claims.

Roper said his right to a fair trial would be hampered and he would, in effect, be on trial in the civil case even though he wasn’t a defendant. He said prosecutors in the criminal case would benefit from information that was divulged.

Roper’s appeal says a stay would protect his interests “by preventing Wal-Mart from filing and making admissions or discovery responses that are damaging and potentially contradictory to Roper’s criminal defense strategy.”

Authorities said Roper apparently failed to slow for traffic ahead on the New Jersey Turnpike and then swerved to avoid a crash but instead his big rig smashed into the back of Morgan’s chauffeured limo bus.

Morgan broke bones in the crash. His attorney, Benedict Morelli, said in December he was fighting to recover from a traumatic brain injury suffered in the crash and was uncertain if he will be “the Tracy Morgan he once was.”

Morgan was absent from the “SNL” 40th anniversary show on Sunday.

Wal-Mart, which has said the crash victims weren’t wearing seatbelts, reached a monetary settlement with McNair’s two children last month. The amount of the settlement hasn’t been disclosed.

A preliminary investigation by the National Transportation Safety Board said Roper was driving 65 mph in the minute before he slammed into Morgan’s van. The speed limit on that stretch of the highway is 55 mph but had been lowered to 45 mph that night because of construction.