New line of apparel, shoes and accessories now available at 300 Macy’s stores nationwide and on macys.com 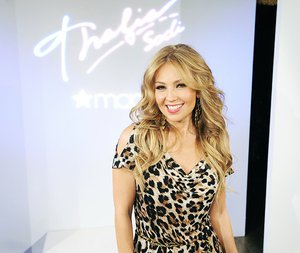 “Macy’s new Thalia Sodi collection is our largest introduction yet, launching in multiple categories and offering our customers a coordinated look across apparel, shoes, and jewelry,” said Jeff Gennette, President of Macy’s. “We have been honored to partner with international superstar Thalia to create a collection inspired by her personal style that will appeal to women everywhere."

The eponymous new line will feature feminine, figure-flattering dresses, tops and pants, as well as shoes and accessories. Bold prints, bright colors, sexy silhouettes and glitzy jewelry bring a touch of glam to the line and are staples throughout the collection.

The collection provides great style and fashion for all women, with a special emphasis on design and fit to appeal to and meet the lifestyle needs of the Hispanic consumer. Comprising a large portion of Thalia’s fan base, the Hispanic customer makes up one of the fastest-growing consumer segments in America. Based on the brand’s in-depth research, the collection was designed to meet the needs of all body types with specific fit attributes and feminine silhouettes in mind.

“I wanted to deliver a collection to my fans that is transitional and fits their dynamic lifestyles – from day to night,” said Thalia. “I also wanted to create something that works and fits for women of all styles and sizes - that will make every woman feel beautiful. I'm very excited to be launching my new collection at Macy's and giving my fans the opportunity to wear some of my favorite silhouettes that reflect my own personal style.”

“In any business and in any category - be it fashion, music or entertainment - if you have differentiation and can excite the marketplace, and if you cater to your consumer with something fresh and new at the right price, you will win,” said Thomas D. Mottola, former Chairman and CEO of Sony Music Entertainment. “That is what the new Thalia Sodi Collection is.”

The official launch celebration will take place on March 5 at the retailer’s flagship Macy’s Herald Square, with a personal appearance by Thalia. Macy’s and Thalia also hosted a media preview event on Tuesday, January 20, 2015, where the collection was previewed during the first-ever Facebook collection launch via a live stream fashion show. The show aired on Thalia’s Facebook page and has now been viewed by millions of fans around the world.

Thalia will also serve as the brand's model and spokeswoman, and appear in a dedicated marketing campaign that will include outdoor, print, radio, digital, and a television commercial that will premiere nationally in mid-February.

For more about the Thalia Sodi collection, including behind the scenes video, an interactive guide to styling the perfect look and to shop the brand, visit macys.com/thaliasodi.

Macy's, the largest retail brand of Macy's, Inc., delivers fashion and affordable luxury to customers at approximately 800 locations in 45 states, the District of Columbia, Puerto Rico and Guam, as well as to customers in the U.S. and more than 100 international destinations through its leading online store at macys.com. Via its stores, e-commerce site, mobile and social platforms, Macy's offers distinctive assortments including the most desired family of exclusive and fashion brands for him, her and home. Macy's is known for such epic events as Macy's 4th of July Fireworks® and the Macy's Thanksgiving Day Parade®, as well as spectacular fashion shows, culinary events, flower shows and celebrity appearances. Macy's flagship stores -- including Herald Square in New York City, Union Square in San Francisco, State Street in Chicago, and Dadeland in Miami and South Coast Plaza in southern California -- are known internationally and are leading destinations for visitors. Building on a more than 150-year tradition, and with the collective support of customers and employees, Macy's helps strengthen communities by supporting local and national charities giving more than $70 million each year to help make a difference in the lives of our customers.

Thalía is a superstar singer, songwriter, radio personality, entrepreneur, philanthropist, actress, fashion designer and digital influencer. She rose to fame after starring in various telenovelas — including “Marimar,” “Maria Mercedes” and “Maria la del Barrio” — that have been translated in several languages and have aired in more than 180 countries with a viewership of more than two billion people worldwide. She has had 28 Top 10 singles — 15 of which went to No. 1 — and she has sold more than 45 million records, making her one of the bestselling Latina artists of all time. She has also received numerous accolades — including two Latin Billboard awards and several Premios lo Nuestro and Premios Juventud awards — and was recognized in 2013 with a star on the Hollywood Walk of Fame. Thalía is also considered one of the most successful female solo Mexican artists internationally by Univision Communications and Telemundo, and she is Mexico’s most famous telenovela actress, with legions of followers around the globe. She has been named one of People Magazine’s Most Beautiful (Los Más Bellos) a record nine times (May 2012) and one of the top 25 most powerful Latinas by People en Español. Thalía will debut a fashion and accessory line exclusively for Macy’s in 2015.