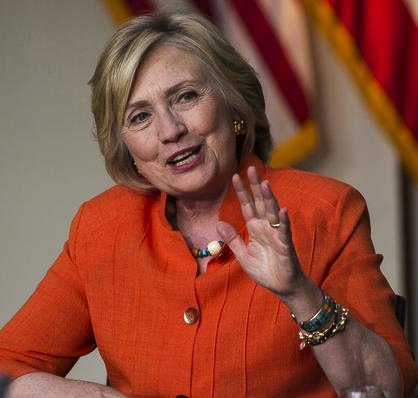 What she heard: Raise our wages.

Throughout Clinton's appearance at the Los Angeles Trade Technical College, home health-care workers from across the country told Clinton what a pay bump would mean to their kids, their families and their dignity. At times, they got emotional.

"He would have been the first kid in the Peters family to attend college," said Artheta Peters, a home-care worker from Cleveland, as she choked up when talking about her son. "But unfortunately, due to my income, I can't afford for him to attend college."

"We won our contract for $15 an hour, but there are still lots of home health-care workers, both private and public sector, that don't make $15 an hour. They need to have a living wage," said Kindalay Cummings-Akers, a home care worker from Springfield, Massachusetts.

"You know, 2016 is coming," said the home health worker, "and somebody is going to be president."

Clinton perked up. "Not just somebody," she said, letting out a big laugh.

The former secretary of state has cast doubt about raising the federal wage to $15. She backed raising the minimum wage to $15 for fast-food workers in New York City last month and has said she supports raising the wage to somewhere between $10 and $12.

"The cost of living in Manhattan is different than Little Rock and many other places, so New York and Los Angeles or Seattle are right to go higher," Clinton said in July.

But the women on Thursday's panel, some of whom were unaware of her $15 minimum wage position, hoped the former secretary of state and Democratic frontrunner would stand with them.

"Please," said Latonya Allen, a home-care worker from Atlanta, "stand by us, walk with us, and help us earn a living wage."

Clinton told the women during the event that their wages needed to be raised.

"To work for an hourly wage that is just totally inadequate, it is just not right that you would have to do that," Clinton said. "We need to keep pushing for a higher wage. ... We need to make it possible for more people to get the higher wage."

She added, "I think that this movement to give dignity and respect and better pay and benefits and training to home health-care workers is one of the most important missions that we should take on together."

But Clinton did not endorse a $15 wage on Thursday and provided few specifics on where she would go on wages. After the event, Clinton took a few pictures --- including one with people wearing "Fight for $15" T-shirts --- but did not take questions from the media.

After Clinton left and the event was over, Cummings-Akers reflected on her time with the former first lady. She told CNN that she supports Clinton's presidential campaign but hopes that her interactions with the "Fight for $15" women would compel her to come out to strongly support the issue.

"I like Hillary," she said, "but hopefully by her meeting us today, she will change her mind. Come election time, I am going to support the person who supports my issues."

When asked if that was Clinton, Cummings-Akers shrugged.