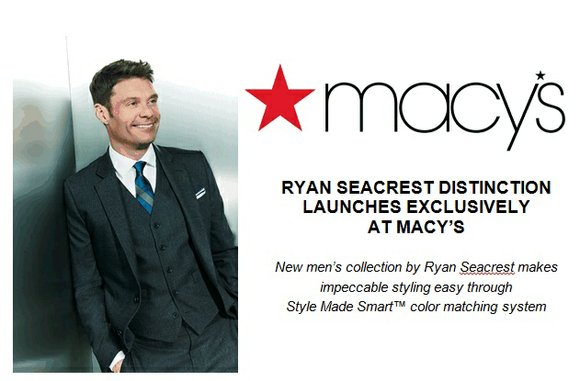 “Ryan Seacrest’s dynamic career requires him to spend a lot of time on-screen. From hosting ‘American Idol’ to ringing in the new year with ‘Dick Clark’s Rockin’ Eve with Ryan Seacrest,’ Ryan’s wardrobe is always impeccably styled,” said Durand Guion, Macy’s vice president / Men’s Fashion Director. “Ryan Seacrest Distinction offers Macy’s customers exquisitely designed clothing and brings a modern edge to timeless designs, all at approachable price points. Best of all, through the Style Made Smart system, Seacrest has made it simple for men to coordinate their tailored clothing needs to effortlessly look sharp every time they get dressed.”

Steeped in the traditional menswear design tenets of quality and value, Ryan Seacrest Distinction is influenced by classic menswear and iconic looks. It incorporates clean lines, striking color stories, textural juxtapositions and bold styling to wardrobe today’s everyday man. Masculine signatures, geometric shapes, proportion, texture, pattern and color are combined with the finest materials. Ryan Seacrest Distinction was developed in partnership with Randa, Peerless and PVH to deliver a quality tailored clothing and accessories collection that is both accessible and affordable. Items retail for $69.50 for a shirt, $150 for a pant, $400 for a jacket, $59.50 for neckwear, and $29.50 to $59.50 for accessories.

Ryan Seacrest Distinction features the Style Made Smart color matching system which allows customers to coordinate various shirts, ties, and jackets with ease, knowing each item will match and look great when paired together. Jackets, pants, shirts, and ties are labeled with numbers from four color groups (black, grey, blue or brown), making it easy to create a perfectly-coordinated look. Shirts and ties are designed to match with two or more of the color groups, generating many tasteful options.

Seacrest will appear in a dedicated advertising campaign in celebration of the collection that will include outdoor, print, radio and digital as well as a television commercial that will premiere nationally on September 9. The TV spot, titled “Non-Stop,” features a behind-the-scenes look at the hectic pace of what happens behind the camera, when a knowledgeable associate transports a young man backstage for the ultimate makeover with Seacrest. Macy's will celebrate the official launch of Ryan Seacrest Distinction with an event at its Herald Square flagship store in New York City.

Seacrest holds preeminent positions in broadcast and cable television, nationally-syndicated radio and local radio. He is celebrated internationally as host of the top-rated, primetime talent showcase "American Idol" on Fox, and he is host of "On Air with Ryan Seacrest," his market-topping No. 1 nationally-syndicated Los Angeles morning drive-time show for Clear Channel's 102.7 KIIS-FM, as well as a nationally-syndicated Top 40 radio show. In 2006, Seacrest launched Ryan Seacrest Productions (RSP), which has since become an Emmy-winning entertainment production powerhouse creating unscripted, scripted and digital programming. As part of the Ryan Seacrest Distinction launch with Macy's, he will host and executive produce "Fashion Rocks" on CBS. With this assignment, Seacrest becomes the first broadcaster to host shows on four major networks – ABC, CBS, NBC and Fox.