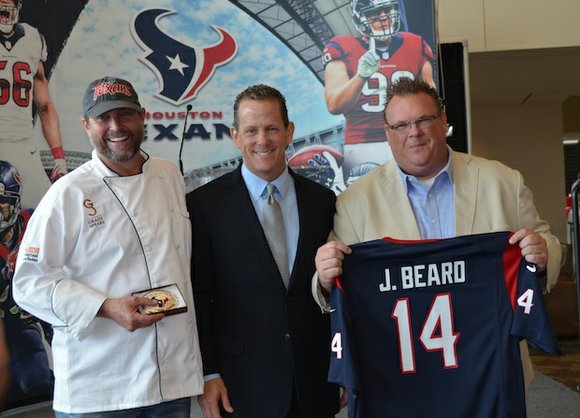 Houston Texans fans better make sure they bring their appetites and their wallets on Houston Texans gamedays. Houston Texans and Aramark are making the ultimate fan experience even better. They have revamped the concessions menu giving fans a break from the traditional with 5-star cuisine that is unique as it is scrumptious.

Jamey Rootes, President of the Houston Texans, said that fans would have the opportunity to experience over 50 separate gameday innovations this season. One of the biggest is the partnership with award-wining Chef Grady Spears and James Beard Award recipient Chef Chris Shepherd.

Chef Spears brings the Grady’s Carvery with specialty sandwiches that are hand carved. I tried the “No Null” Texans Chicken Stack. It is hard to say what was the bigger star on the sandwich. It was a three-way tie between the moist carved Hill Country smoked turkey, light and soft Sheila Parton jalapeno roll and the tangy cranberry mayo. It all made for one terrific sandwich.

By far one of the most interesting new dishes comes from Chef Shepherd. His restaurant called Hay Merchant features PB&J Wings and Tater Tots. Wait before you squirm in disgust. This is something that has to be tasted because it is surprisingly really good. The funny thing about it is that the peanut butter flavor is not overpowering. Plus the wings are not as sticky as I thought and the peanut butter doesn’t stick to the roof of your mouth. I think the dish is genius and a good twist on two traditional favorites.

Chef Shepherd also brings the Underbelly to showcase the Texans Two Step. Fans can get a jalapeno cheddar dog topped with Korean braised beef topped with bacon jalapeno jelly. On the side is a dish that really could be a star on its own, tater tot casserole. One bite and you’ll melt. It turns the common tater tot into a gourmet entrée. 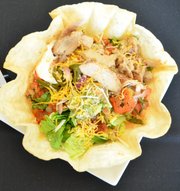 If you try to be a health nut like me at times then you will want to venture to the Club Level to eat. There your stomach rumbles will be silenced by the taste of taco salad, kickin’ chicken salad, or made to order salad from Green Fork Express. If you are really hungry my first choice would be the taco salad. You get a lot of bang for your buck. The huge taco shell is filled with chicken, beef, or pork and topped with the traditional salad fixings plus sour cream, guacamole, salsa and a lime. If you like things a little hot in the kitchen, fill up on the kickin’ chicken salad and make sure to have water close by. The heat of this salad can sneak up on you if you eat a lot of lettuce with each bite. Also adding cilantro ranch as your dressing of choice kicks up the heat of this salad even more.

Bernie’s Bus is still at NRG with their Substitute Burger. I don’t know what it is substituting but it is certainly not flavor. I wanted more and more after the first bite. Although all the ingredients of this burger are really good, I think the bun is what sets the tone. It is absolute awesome. The flavors of the meat, blue cheese, crispy bacon, burgundy laced mushrooms, and “tipsy caramelized onions melt into the lightly buttered toasted bun. I literally took the top of my bun off to eat the bread by itself. So so good!