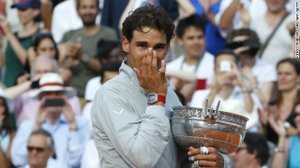 (CNN) -- The president of world soccer's governing body is used to being admonished.

But it isn't often the manager of arguably the biggest club on the planet is tearing a strip off Sepp Blatter.

Real Madrid boss Carlo Ancelotti felt moved to tell Blatter to button it after the Swiss insisted Germany goalkeeper Manuel Neuer should be crowned footballer of the year.

That affronted Ancelotti, who thinks his star player -- Cristiano Ronaldo -- is a shoo-in for a second successive Ballon d'Or award.

The Portuguese fired a record 17 goals in the European Champions League last season as Real won its 10th crown and Ancelotti is in no doubt the award should be his.

"It has surprised me what the FIFA president has said and it appears he is unable to keep his mouth shut," Ancelotti told a press conference on Tuesday.

"The Ballon d'Or is something that gets talked about months before yet this year there are not that many things to think about.

"Last year Cristiano had other players like Lionel Messi and Franck Ribery contesting it but this year, with the titles he has won and the goals he has scored, there's no doubt he is going to win it.

On a visit to 2018 World Cup host Russia, Blatter suggested Neuer should be handed the gong after a string of exceptional performances for Germany on its way to a World Cup triumph in Brazil.

FIFA's president had also suggested the Bayern Munich stopper should have been handed the Golden Ball award -- given to the World Cup's best player -- rather than Barcelona striker Lionel Messi.

Messi, a four-time winner of the Ballon d'Or is again on the list, with other luminaries, but, perhaps surprisingly, not Barcelona's newest striker, Luis Suarez.

The Uruguayan also starred for his country at the 2014 World Cup, before he was banned from all football for four months for biting Italian defender Giorgio Chiellini.

The award is voted for by coaches and captains of national teams and journalists across the world selected by France Football Magazine, and will be awarded in Zurich, Switzerland, on January 12.

Ancelotti, who also claimed the Spanish Cup in his first season at the helm in Madrid, has been nominated for the Best Coach prize.

And though he joked he might be out of the running to win it after his harsh words for Blatter, Ancelotti did say he was pleased to have been selected.

"I am proud to be in this category and would like to win it, although I have already received the biggest prize when we claimed the Champions League," he said.

"If I win another one I'll have to expand my trophy cabinet."