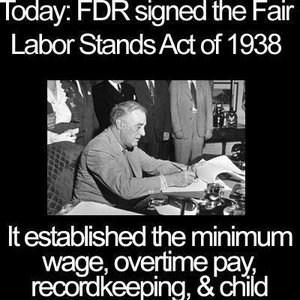 FROM THE ST. LOUIS POST-DISPATCH

In the years before the passage of the Fair Labor Standards Act in 1938, in a time fondly remembered by many American businesses as "the good old days," there was no such thing as "overtime" in large parts of the economy.

Unfortunately, over the past 10 years, the not-so-good old days have made a comeback. The White House reports that 88 percent of nonsalaried workers today are not guaranteed time-and-a-half for working overtime. That's up from just 35 percent in 1975.

Last week, President Barack Obama signed an executive order that might eventually stop the erosion of overtime pay. The Labor Department was ordered to come up with new rules to stop companies from squeezing their workers. Of course, the National Federation of Independent Business immediately decried the plan as more "costly and unwieldy regulation." Which, if true, would also apply to child labor laws.

The overtime choke is one of many reasons why wages are stagnant in most parts of the economy and have been for four decades, even as stock prices have soared. It contributes to record income inequality. It is fundamentally unfair: It's hard enough to get a job in today's economy, but then to have your labor devalued in ways both legal and illegal adds insult to injury.

The 40-hour, five-day workweek had been an early achievement of the American labor movement. But where workers weren't unionized, 10-hour days and 60-hour weeks were commonplace. This was especially true during the Great Depression, when jobs were scarce.

President Franklin Roosevelt had pledged to make the 40-hour week the national standard and to require overtime pay for overtime work. The prewar industrial mobilization finally ended the Depression. The war itself created enough demand for labor, and sufficient profits, that overtime stopped being an issue. Postwar prosperity left it like that. Jobs were a way to fairly distribute profits.

By 1975, any full-time hourly worker paid less than $250 a week (about $1,000 in today's dollars) was guaranteed overtime. Since that time, the threshold has been creeping upward, falling way behind the rate of inflation. By 2004, any hourly worker earning more than $455 a week was not eligible for time-and-a-half. That's $23,660 a year and that's where it stands today: $190 below poverty level for a family of four.

Hourly workers who belong to unions still bargain for overtime pay, but only one in every nine workers today belongs to a union. In the private sector, only one in 16 is unionized. For business, these truly are the good old days.

Beyond these legal ways to choke off overtime are sub-rosa ways of cheating workers. Attention was focused on them last week when seven lawsuits were filed against McDonald's Inc. and some of its franchise owners in three states charging "wage theft."