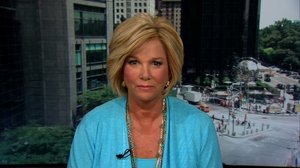 A tiny spot on a precautionary ultrasound that former "Good Morning America" co-host Joan Lunden received after getting an all-clear on her annual mammogram was the first sign of trouble. A biopsy was taken.

"I knew the minute the doctor walked in the office," Lunden told CNN Chief Medical Correspondent Dr. Sanjay Gupta in an interview. "You could just tell by her demeanor. She said, 'you definitely have breast cancer.'"

Lunden, who co-hosted "GMA" from 1980 to 1997 and promotes health and wellness for women, said she "jumped into action," immediately consulted specialists and sought other opinions before starting with chemotherapy.

"When I heard those words -- it doesn't make any difference if you're a doctor -- those are scary words and they're shocking," Lunden said.

Doctors earlier this month discovered two small tumors in her right breast, she said. It was triple negative breast cancer, a rare and aggressive form that occurs more often in younger women and African-American or Hispanic women.

"This is kind of subset," she said. "One thing I learned is that breast cancer, you think of it as one thing. Every woman has a different kind of breast cancer as far as how the pathology comes out, where it is. And you really need to get a lot of opinions."

On Tuesday, Lunden, 63, first revealed her recent diagnosis to fans via Twitter and a letter on her website JoanLunden.com. She considered keeping the news private. What would she say to her 9- and 11-year-old twins? She thought herself somehow exempt from all this?

"I was scared that people would think I let them down," she said. "In the first two days or so, I just wanted to go away somewhere and not let anybody find out. I also felt like I didn't want to tell the kids because my younger kids would be worried. We were advised by everyone that that was really a mistake."

Lunden recently offered her first TV interview about having the disease to current "GMA" co-host and breast-cancer survivor Robin Roberts, who advised her on dealing with her hair loss and other issues. "GMA" co-host Amy Robach is currently being treated for breast cancer.

Lunden told CNN that she decided to shave her hair before losing it to chemotherapy, enabling her to "stay in an empowered position instead of woe-is-me patient position."

"When it starts to go, it's shocking, embarrassing and depressing," she said she learned of the hair loss. "Preempt it. Get it shaved off. I did that. And I thought it was going to be like the biggest deal in the world. And you know what? I felt I didn't have it done to me. I walked in and I said, 'Do this.'"

After consulting doctors, Lunden said, she decided on therapy aimed at reducing the size of a tumor with chemotherapy, a lumpectomy to remove the cancer, followed by radiation therapy.

"What I say I'm doing doesn't mean that's what you should be doing," she said. "Every woman's breast cancer is different."

Lunden said her tumor was picked up after an ultrasound, which is used for women who have dense fibrous breast tissue where cancers are not always detectible on mammograms.

Lunden, whose late father was a cancer surgeon, said she had no symptoms before her diagnosis or family history of cancer.

"Most women do not have any symptoms before they're diagnosed with breast cancer," Dr. Valerie Montgomery-Rice, dean of the Morehouse School of Medicine, told CNN. "A lot of women will pick up something that feels strange on their own."