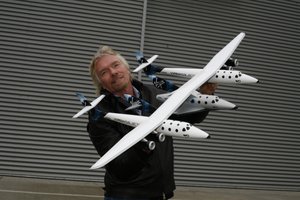 Here's a quick look at the life of founder and CEO of Virgin Group, Ltd., Richard Branson.

Other Facts: Struggled in school due to dyslexia.

Signed notable artists such as the Sex Pistols, Culture Club, the Rolling Stones and Genesis to the Virgin Records label.

His possessions include Necker Island, Moskito Island, Makepeace Island and Great Britain Island; a super-yacht named the Necker Belle; a submarine named the Necker Nymph and a space craft named SpaceShipTwo or the VSS Enterprise.

Timeline: 1966 - Starts the magazine "Student" shortly before dropping out of school at the age of 16.

1987 - Along with Per Lindstrand, becomes the first person to cross the Atlantic Ocean in a hot-air balloon.

1992 - Branson sells Virgin Music Group to Thorn EMI. He says that the sale will allow him to concentrate on his airline, Virgin Atlantic.

1999 - Is knighted for his contributions to entrepreneurship.

June 2004 - Branson crosses the English Channel in one hour, 40 minutes and six seconds in an amphibious vehicle, setting a world record.

November 22, 2013 - Branson announces that travelers for his commercial space travel flight can pay with the digital currency Bitcoin.

For more information go to http:.//www.cnn.com