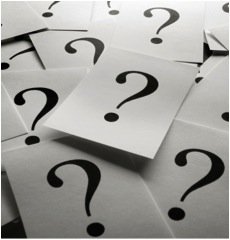 SHow your interest with questions

During World War II, the U-boats were a feared armada for German submarines that preyed on Allied shipping. Then there was Karl-Adolph Schlitt. He commanded one of the new-fangled U-boats, which had special toilets that could be flushed at great depths. If you did it right. Otherwise, you'd flood the sub and have to surface, which is exactly what happened. His boat was destroyed by the British.

The Mississippi starts at Lake Itasca in Minnesota, which is barely two square miles. (The lake that is, not the state.) But the river picks up steam quickly, as tributary after tributary flows into it. The first really big one is the Missouri, which collides with the Mississippi near St. Louis. In fact, the Missouri is what makes the Big Muddy so muddy. A little further down, at Cairo, Illinois, the Mississippi meets the Ohio, which contributes even more water than the Missouri. It reaches the Gulf of Mexico in Louisiana.

At 1,310 feet below sea level, the Dead Sea is the lowest place on the earth. It's also the saltiest water in the world, nine times as salty as the ocean, and so salty you can float in it. All that salt explains why the Dead Sea is also dead. Nothing much really lives in it, except for brine shrimp. No birds even fly over it, because there is nothing in the lake for them to eat.

The flooding of the Nile was a crucial component of Egyptian culture for centuries. Life was based on the river's ebb and flow. Ancient Egypt developed an entire mythology around it. And, in 1968, the flooding stopped, thanks to the Aswan High Dam. In fact, building the dam required moving the Abu Simbel temples, built by Pharaoh Ramses II. It did, though, create Lake Nasser.

Some Christians believe the Rapture is imminent. God will call them up to heaven, leaving the sinners behind. Atheists aren't going up. Neither are pets. So in 2009, some atheists formed Eternal Earthbound Pets. For the low, low price of $110 they'll not only take care of Fluffy after you're Raptured, they also promised to be damned to hell if the end times come. That's really clever!