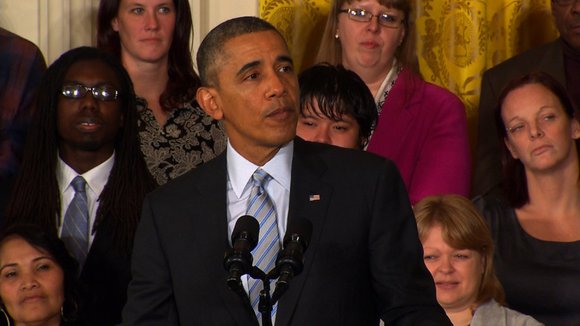 Starting in 2015, businesses with new or renewed federal contracts will have to pay their minimum wage workers $10.10 an hour. President Obama mandated the increase, from the country's federal minimum wage of $7.25, by signing an executive order on Wednesday.

NEW YORK (CNNMoney) -- Starting in 2015, businesses with new or renewed federal contracts will have to pay their minimum wage workers $10.10 an hour.

President Obama mandated the increase, from the country's federal minimum wage of $7.25, by signing an executive order on Wednesday.

The new $10.10 hourly wage will be indexed to inflation after the first year, and it will apply to contracts and subcontracts that provide the federal government with concessions, services and construction.

The move comes after a push from liberals, who worry that lawmakers will not move quickly, if at all, on legislation to gradually raise the minimum wage for everyone to $10.10 an hour.

Obama's order will likely affect fewer than half a million workers.

But the hope is it will spur Congress to approve the same increase for all workers.

Raising the minimum wage, the White House and other advocates argue, would have many positive effects, including increased productivity and lower turnover. Just as importantly, they say, it can lift a family of four supported by a full-time minimum wage worker out of poverty.

"Not only is it good for the economy, it's the right thing to do. You work full time? You shouldn't be living in poverty," Obama said.

The president's order will also apply to disabled workers employed by federal contractors. Currently they may be paid less than the federal minimum wage under certain certificate programs.

Tipped workers employed by businesses with federal contracts would also benefit. Currently workers who receive tips are paid a minimum required base of $2.13 an hour.

Obama's order will raise that base to $4.90 and increase it by 95 cents a year until it reaches 70% of the regular minimum wage. If a worker's tips on top of that don't add up to $10.10 an hour, the federal contractor will be required to make up the difference.

Among the types of workers who would benefit from the president's executive order are concession workers in national parks, nursing assistants caring for veterans, people who serve food to U.S. troops and those who maintain the grounds on military bases, the White House said.

Some studies show a negative effect on jobs. But others show a positive effect or no effect at all.