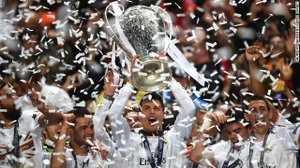 (CNN) -- Champions League holders and arguably Europe's most in-form team Real Madrid were drawn against German side Schalke 04 in the last 16 of Europe's most prestigious competition.

Arsenal were arguably handed an easier route to the quarterfinals after drawing France's Monaco, which will see the London club's manager Arsene Wenger return to the team he managed for seven years between 1987 and 1994.

On Friday Real Madrid extended their winning streak in all competitions to a remarkable 20 games with a 4-1 away win over Almeria.