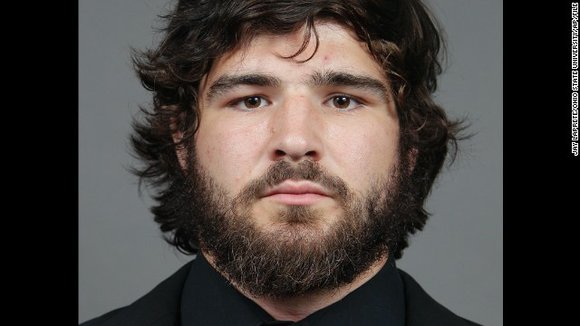 His cell phone was last pinged about 2:30 a.m. Wednesday, according to his sister.

Kosta Karageorge, a reserve defensive lineman, was last seen about 2 a.m. Wednesday, according to a tweet sent from his personal account.

In a copy of the missing persons report obtained by CNN, Susan Karageorge told police she received a text from her son about 1:30 a.m. that said, "I am sorry if I am an embarrassment but these concussions have my head all f*ed up."

She added that her son has had several concussions and confusion "spells."

Karageorge is a wrestler and football walk-on, according to CNN affiliate WCMH.

Pelfrey said police are following up multiple leads, including video from a store in east Columbus, Ohio. The family and volunteers have also ramped up their search efforts, posting fliers around town.

Karageorge "was a hard worker on the field and pleasant off the field. He has been an important player in practice for us, right up until the time he was reported missing," OSU football coach Urban Meyer said in a statement. "If anyone knows anything about his whereabouts, please help his family and contact the authorities."

Team physician Dr. Jim Borchers said that the team was not able to discuss or comment on Karageorge's medical care.

"First and foremost, our primary concern is for the health, safety and welfare of Kosta. ... We are confident in our medical procedures and policies to return athletes to participation following injury or illness," Borchers said.

Karageorge's sister, Sophia, told Cleveland.com that he was upset about something Tuesday night and that his roommates said he went for a walk.

His cell phone was last pinged about 2:30 a.m. Wednesday, according to his sister.