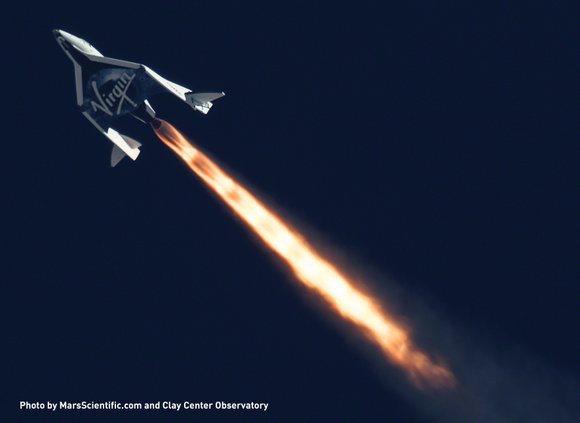 At approximately 8 a.m. local time from the Mojave Air and Space Port, the company’s WhiteKnightTwo (WK2) carrier aircraft took off carrying SS2 to an altitude of 46,000 feet. Virgin Galactic Chief Pilot Dave Mackay was at the WK2 controls, assisted by Scaled Composites (Scaled) co-pilot Mike Alsbury and The Spaceship Company Flight Test Engineer Scott Glaser. Upon release from WK2, SS2 pilots Mark Stucky and Clint Nichols, both of Scaled, ignited the rocket motor for the planned 20-second burn propelling the spaceship to 69,000 feet. During this time, SS2 achieved a maximum speed of Mach 1.43. SS2 landed in Mojave at 9:25 a.m. local time completing the flight test with the pilots reporting a flawless flight.

Chairman of aabar Investments PJS, H.E. Khadem Al Qubaisi, commented: “This flight milestone represents a key step forward for the Virgin Galactic team. The successful completion of all major aspects of the flight mission demonstrates that we are very close to achieving one of Galactic’s key goals: commercialising access to space for the broader public. I would like to congratulate the whole team on their continued success.”

“We couldn’t be more delighted to have another major supersonic milestone under our belts as we move toward a 2014 start of commercial service,” said Virgin Galactic Founder Sir Richard Branson. “It was particularly thrilling to see for the first time today the whole elegant system in action during a single flight, including the remarkable feathering re-entry system. It was this safety feature more than anything else thatoriginally persuaded us that the overall design of the system was uniquely fit for purpose. Everything we have seen today just confirms that view. Congratulations to all involved!”

Virgin Galactic and The Spaceship Company will host a career fair in Mojave, Calif., on Saturday, Sept. 7 from 8 – 11 a.m. PST with a virtual career fair taking place from 9 – 10 a.m. PST at google.com/+VirginGalactic. More than 100 open positions are available with specific career details posted at http://www.virgingalactic.com/careers/ and http://www.thespaceshipcompany.com/careers.

Virgin Galactic, owned by Sir Richard Branson’s Virgin Group and aabar Investments PJS, is on track to be the world’s first commercial spaceline. To date, the company has accepted nearly $80 million in deposits from approximately 630 individuals, which is approximately 10% more than the total number of people who have ever gone to space. The new spaceship (SpaceShipTwo, VSS Enterprise) and carrier craft (WhiteKnightTwo, VMS Eve) have both been developed for Virgin Galactic’s vehicle fleet by Mojave-based Scaled Composites. Founded by Burt Rutan, Scaled developed SpaceShipOne, which in 2004 claimed the $10 million Ansari X Prize as the world’s first privately developed manned spacecraft. Virgin Galactic’s new vehicles, which will be manufactured by The Spaceship Company in Mojave, Calif., share much of the same basic design, but are being built to carry six customers, or the equivalent scientific research payload, on suborbital space flights. The vehicles will allow an out-of-the-seat, zero-gravity experience with astounding views of the planet from the black sky of space for tourist astronauts and a unique microgravity platform for researchers. The VSS Enterprise and VMS Eve test flight program is well under way, leading to Virgin Galactic commercial operations, which will be based at Spaceport America in New Mexico.