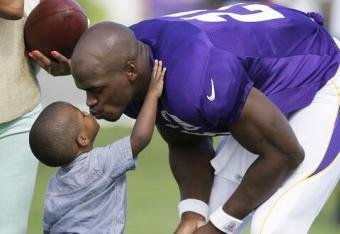 Minnesota Vikings running back Adrian Peterson copes with the death of his two-year-old son.

For some, going to work after losing a son would be unthinkable. For others, it's a way to cope.

That's the route Minnesota Vikings running back Adrian Peterson took, choosing to play Sunday, just two days after the death of his son, who was living with his mother in South Dakota.

The woman's 27-year-old boyfriend, Joseph Robert Patterson, has been arrested on felony battery and assault charges in the child's death, according to Sioux Falls, South Dakota, police.

"Even if it's bad, I try and take the good from it. That's the way I approach life, with all situations," Peterson told reporters after the game. "I never thought about not playing. It was all about going out there and praying that I had the strength to get through and help my team, so that was my focus."

Peterson, who rushed for a season-low 62 yards and caught three passes for 21 yards in the Vikings' 35-10 loss to the Carolina Panthers, took some heat for the decision from people who questioned how he could play a football game so soon after losing a child.

In a text to a Fox Sports reporter, Peterson said he decided to play Sunday for the same reason he participated in the NFL's skills testing event for potential draft picks a day after his brother died in 2007.

"God wants good to come from it," he told NFL on FOX sideline reporter Laura Okmin in a text before the game Sunday.

"We mourn and grieve, but heaven had the baddest welcoming party for my son. That knowledge gives me peace," Peterson said, according to Fox. "I'm still hurt and feel the pain of life, but I'm able to function because of the peace and joy of knowing my loved ones are in a much better place."

Peterson confirmed the child was his in a tweet Friday. He tweeted that another child, Adrian Peterson Jr., lives with him and is fine, and he asked people to stop distributing pictures of that child.

On Friday, he tweeted thanks to fellow players, some of whom had taken to the social network to defend his decision to play.

"The NFL is a fraternity of brothers and I am thankful for the tweets, phone calls and text messages from my fellow players," he tweeted Friday.

"I can't imagine, you know, the heavy heart that he had today, being out on the field," Rudolph said. "But he spoke to us right before the game, right before he took the field and said he was going to give it his all, for all four quarters, and that's exactly what he did."