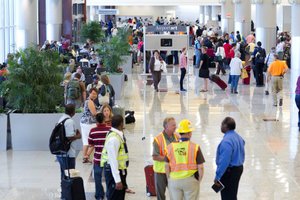 An estimated 25 million passengers will fly over the 12-day Thanksgiving travel period, peaking on Sunday, December 1, when 2.56 million are expected to fly, according to Airlines for America, an industry trade group.

All told, Thanksgiving air travel is expected to increase by 1.5% over last year, the association said.

A4A Vice President John Heimlich said airlines are adding seats to accommodate the holiday demand, and planes are expected to be more than 85% full on the busiest days.

Other peak holiday travel days will be Wednesday, November 27, with a predicted 2.42 million passengers, and Sunday, December 1, with 2.56 million fliers. Thanksgiving Day is November 28.

The A4A has characterized 2013 as a year in which the airlines' "razor thin" results have become "paper thin."

Fuel remained the largest and most volatile cost for airlines, accounting for 35% of overall operating expenses, A4A said.