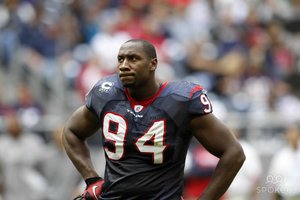 Defensive end ANTONIO SMITH of the Houston Texans has been suspended without pay for the final two preseason games and from the first regular-season game for a flagrant violation of NFL safety rules in last Saturday’s game against the Miami Dolphins.

The suspension was imposed by NFL Vice President of Football Operations MERTON HANKS.

Smith may attend team meetings prior to the next two preseason games but will not participate in practice or play in the Texans’ games on Sunday, August 25 against the New Orleans Saints and Thursday, August 29 against the Dallas Cowboys. Beginning on Saturday, August 31, Smith is suspended for Week 1 of the regular season and may not take part in any team activities, including the club’s game on Monday, September 9 against the San Diego Chargers. He will be reinstated on Tuesday, September 10.

In the first quarter of last Saturday’s game against Miami, Smith forcibly removed the helmet of Dolphins guard RICHIE INCOGNITO and then swung the helmet at Incognito in an attempt to strike him with it.

“A player may not use a helmet that is no longer worn by anyone as a weapon to strike, swing at, or throw at an opponent.”

Under the Collective Bargaining Agreement, the suspension may be appealed within three business days and an expedited hearing and decision would take place this week in advance of Sunday’s game. Appeals are heard and decided by either MATT BIRK or TED COTTRELL, the officers jointly appointed and compensated by the NFL and NFLPA to decide appeals of on-field player discipline.