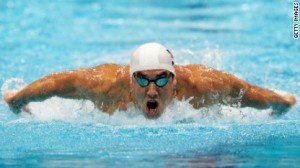 The winningest Olympian ever is still looking for his first gold of the London Games, getting out-touched at the wall by South Africa's Chad le Clos. Phelps flipped away his cap in disgust when he saw a "2'' beside his name, knowing he had blown it at the end by trying to glide to the wall instead of taking one more stroke.

Despite the disappointment, Phelps tied Soviet gymnast Larisa Latynina as the career leader with 18 medals.