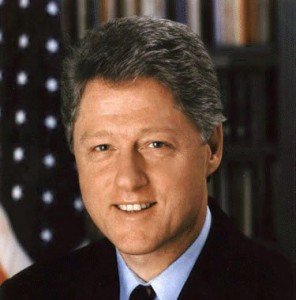 Former President Bill Clinton was in "good spirits" Thursday after undergoing a procedure to insert two stents into one of his coronary arteries, his office said.

Clinton, 63, was hospitalized at the Columbia Campus of New York Presbyterian Hospital after experiencing chest pain, according to Douglas Band, counselor to the former president.

Despite other media reports that he had left the hospital, Clinton remained there Thursday evening, a spokesman for the hospital said.

A stent is a tiny tube that is inserted into a narrowed or blocked vessel to open it up and allow blood to travel through, according to CNN's chief medical correspondent Sanjay Gupta.

A source close to the former president said "he is fine" and will recuperate.

Clinton's wife, Secretary of State Hillary Clinton, left the White House after a meeting in the Oval Office and headed to New York, a State Department official said. The Clintons' daughter, Chelsea Clinton, was with her father, according to spokeswoman Julie Goldberg.

In a written statement, Band said, "President Clinton is in good spirits, and will continue to focus on the work of his Foundation and Haiti's relief and long-term recovery efforts."

Clinton hasn't left the public eye since he left the White House, maintaining an active schedule devoted to global philanthropic interests and speeches. His latest role as the U.N. special envoy for Haiti has taken him twice to the earthquake-ravaged island nation and he is leading efforts to raise money for the hard-hit area.

Sources close to Clinton said the former president is hard to slow down and has ignored the myriad of concerned friends who tell him to take better care of himself.

"He still works long days and stays up very, very late," a friend of Clinton's told CNN. "He has gone from a frenetic pace to what most people would consider a frenetic pace.

"He's approaching Social Security, and he's living a life not that different from his 30s."

The friend said that while Clinton's diet has improved since he underwent quadruple bypass surgery in 2004, "he certainly indulges every once in a while consistent with past behavior -- (for example) fries with his fish."

His 2004 surgery was performed at the same hospital where he was admitted Thursday. Doctors in 2005 operated again on Clinton to remove scar tissue and fluid that had built up after his bypass surgery.