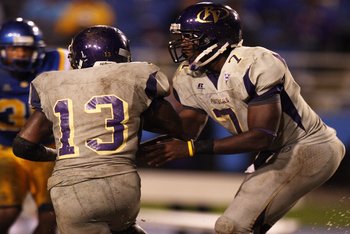 Prairie View A&M ended 22 years of futility on a rainy Saturday evening at The Cotton Bowl as the Panthers held on to defeat Grambling State 35-32 before 42,786 spectators for the first time since 1986.

Prairie View stormed ahead on its opening possession as quarterback KJ Black scored on a 4-yard scamper to cap off an 18-play, 59-yard drive for a 7-0 lead. After a three-and-out by Grambling State, Prairie View jumped ahead by two scores with 39 seconds left in the quarter as Donald Babers scored on a 4-yard run. Brady Faggard’s PAT sailed through the uprights as Prairie View led 14-0.

Grambling trimmed its deficit to one touchdown early in the second quarter as Greg Dillon recorded a 2-yard touchdown run. Dillon’s score was set up by a 50-yard reception to wideout Kiare Thompson eight plays into the drive. Prairie View went 3-and-out on its next drive and Grambling once again answered as they trailed 14-10 after Ari Johnson’s 28-yard field goal. Prairie View fought back and closed the half out strong as Black connected with wideout Anthony Weeden for an 8-yard touchdown with 18 seconds left for a 21-10 advantage.

With Grambling driving on its opening possession in the second half, PVAMU safety Chris Adingupu came up big as the junior from Miami halted a GSU drive with an interception at the PV 10. Prairie View responded on its next drive with a bang as Black ran for 46 yards to move them ahead 28-10 after Faggard’s PAT.

Prairie View’s 18-point deficit failed to hold up from that point as Grambling State erupted for 19 points in the third quarter to move ahead 29-28. However, Prairie View refused to go away as Black connected with Weeden once again for a 52-yard touchdown reception on 2nd-and-25 to close out the third quarter for a 35-29 lead.

The Panther defense came up big in the fourth quarter as they held Grambling State to a 22-yard field goal with 9:43 remaining to lead 35-32. Both teams traded punts from that point but PVAMU closed out the game as Black converted a 4th-and-1 with 1:22 remaining to close out the win.

Saturday’s win gives Prairie View head coach Henry Frazier III a win over every SWAC opponent since he accepted the position prior to the 2004 campaign. The last time the Panthers defeated Grambling State, Conway Hayman was in charge as Prairie View won 24-19 at The Cotton Bowl in 1986.

Prairie View finished with 364 yards of total offense to Grambling’s 380. Black led the way for Prairie View with 184 yards on 19-of-26 passing in addition to 75 yards rushing. Weeden topped all PVAMU wideouts with 79 yards on four receptions. Dillon finished with 309 yards passing on 18-of-28 attempts including two touchdowns.

For his performance in this memorable game, the Southwestern Athletic Conference as its Offensive Player of the Week selected Prairie View’s running back Donald Babers. The junior from Houston rushed for 111 yards on 20 attempts with one touchdown along with catching four passes for 63 yards and a touchdown in Prairie View’s 16-14 win over Southern on October 22 in Baton Rouge, LA. Babers selection marks the fourth consecutive week a member of the PVAMU football team has nabbed the league’s weekly offensive honor. Quarterback K. J. Black captured the honor three straight weeks from Oct. 5-19. Safety Chris Adingupu, returner Joe Fontenot, and Black were recognized by the SWAC with notable performances in the game against Southern.

This historic victory put the panthers in prime position for a national ranking. The Prairie View A&M University Panther football team made its first appearance in the Football Championship Subdivision (FCS) poll this year with a No. 25 national ranking in The Sports Network FCS Top-25 poll.

After narrowly missing the Top 25 the past few weekends, the Panthers garnered a total of 269 points in this week’s poll to debut at No. 25. The ranking marks the first time in program history the Panthers have been ranked during the season. Last season, the Panthers were ranked 25th in The Sports Network’s final poll of the year.

The Panthers are off this week and will return to action on Saturday, Nov. 7 at 2:00 p.m. against Alabama A&M University at Blackshear Field.