“We Are the Ship”, words and paintings by Kadir Nelson 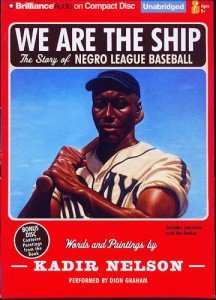 About this time – when the weather gets warm and bats come out – your thoughts turn to baseball. This year, you’ll hit one out of the park. You’ll hear cheers as you round the bases. Some day, you’ll be a star.

So who batted or fielded before you? In the new audio book “We Are the Ship: The Story of Negro League Baseball” by Kadir Nelson, you’ll find out.

Once upon a time, African American baseball players had just one option if they wanted to play pro ball: the Negro Leagues.

Early in the last century, white players weren’t allowed to play baseball with black players. Oftentimes, they didn’t want to. But everybody wanted to watch baseball, so the Negro Leagues were founded in 1920. Black athletes then had an organized way to play ball and their games drew huge crowds of all races.

Negro League players had it rough. Travel was difficult, and many times, there was nowhere to stay while on the road. Sometimes, they couldn’t find a place to eat.  Protective equipment was rare, and getting hurt was common. When the Negro Leagues began holding night games, a team might play up to four games in one day. But “none of that mattered”. They were ball players!

“We played tricky baseball,” said “Cool Papa” Bell. Negro League games were exciting to watch. They were fast, snazzy, and stylish. Some of the guys would “clown” during the game and there would be comedy routines on the field. Still, Negro Leaguers found that playing baseball in Cuba, Mexico, the Dominican Republic, and Puerto Rico was easier and more fun. Fans there didn’t care what color skin the player had, and the weather was always warm.

In 1947, Jackie Robinson “went to the majors”, breaking the color barrier in baseball. Within a year, the Negro National League was gone.

There are three big pluses that I can see with this audiobook:

“We Are the Ship” is filled with remembrances, historic events, names of dozens of players familiar to baseball fans, and true anecdotes. This makes it a great audiobook, not just for 7-years-old-and-up fans, but also for Dad, Mom, or Grandpa.

Narrator Dion Graham’s performance is so vivid, it puts you on the dusty field, on a bleacher, in a cramped car. Shut your eyes when you listen to this audiobook, and you’re there.

And though this is an audiobook, you needn’t feel like you missed anything by not having the actual book. There’s an interview with author and illustrator Kadir Nelson at the end of disc 2 and a DVD with all the books’ artwork included.

If you’ve got a Little Leaguer or baseball fan in the house, or if you’re looking ahead for a great Father’s Day gift, this is one to get. “We Are the Ship” holds water.