Susan G. Komen for the Cure’s Circle of Promise Announces Stellar Progress Toward Breast Cancer Awareness in the African-American Community 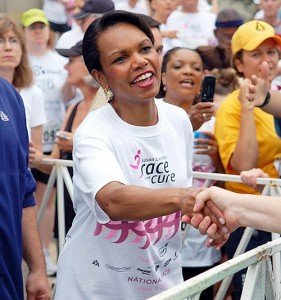 “In just one year, we’ve grown from just 300 people to more than 10,000 people determined to end breast cancer for women of color,” said Andrea Anderson, director, integrated marketing, Susan G. Komen for the Cure®. “We’ve traveled to Africa. We’ve been to the Caribbean. We’ve been to neighborhoods right here in the United States where women of color face significant challenges to care.”

“We are energized, we are empowered, and with community support, we will make serious inroads into the breast cancer crisis for African-American women,” Anderson said.

The challenge is significant:  Breast cancer mortality rates are higher in the African-American community than for Caucasian women. African-American women often face more aggressive forms of the disease, and do not survive as long with their illness.  Screening and education programs are often unavailable or of poor quality.

This led Susan G. Komen for the Cure®, the world’s leading breast cancer organization, to launch the Circle of Promise in October 2007, aimed to all women of color and launched first in the African-American community.

The organization has donated several million dollars for scientific research and community programs geared to addressing the breast cancer crisis for women of color, including $1 million in 2008 to launch the Chicago Breast Cancer Quality Consortium, and another $1 million for a study including race in breast cancer.

• Actress Gabrielle Union, philanthropist Malaak Rock and Billye Aaron joined a Komen mission trip to Africa this past summer to dedicate a hospital. Breast cancer affects a relatively young population in Ghana; girls as young as 16 have been diagnosed with the disease.

• Newscaster René Syler has participated in signature Komen events, as have prominent doctors and scientists.

• TV One and Luster Products, Inc. have formed a partnership with Circle of Promise to produce a television documentary in 2009 focusing on breast cancer in the African-American community among both women and men.  TV One also will produce four public service announcements (PSA’s) in 2009 with Circle of Promise Celebrity Ambassadors Richard Roundtree, Lalah Hathaway, Gabrielle Union and René Syler slated to record the PSA’s.